It’s Too Much! Signs of Sensory Overload in Toddlers 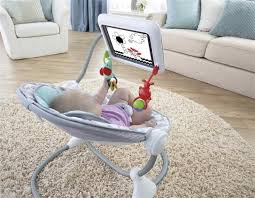 It’s Too Much! Signs of Sensory Overload in Toddlers

Today I read a survey reported by the Academy of Pediatrics that said the average six- month-old in America watches half an hour of something per day on a mobile device. A third of them were already swiping and tapping the screens!

In this age of technology, many of us (and according to that survey, even our youngest children) are spending way too much time in front of screens.

As adults, we may be able to adjust to these demands and know “when to say when” when it comes to our devices. When our brains and bodies begin to send us clear messages that we’ve had enough for a while, we take a break. We stand up and move around a bit, go get something to drink or eat, visit the restroom, and then return to our work (or pleasure) after we’ve sensed that everything feels better and it’s okay to resume the task.

Most grown-ups, even when we ignore those little warning bells, are still able to adapt and cope with any signals that tell us that we’re overdoing it. We may look around the room for a minute, or even close our eyes for a brief respite.

When we allow a young child to “veg out” in front of any screen – an iPad, the DVD player, even with an educational game or app –  for an extended amount of time, we should be watchful that a child is becoming overstimulated. The signs of visual over-stimulation are similar to any other sign of sensory overload:

I’ve seen this behavior in therapy sessions with toddlers and I am careful to quiz parents about what’s happened just before the session so that we can make assumptions about what could be causing a child’s extreme reactions and then make the necessary adjustments.

I’ve also seen these behaviors as a mom. When my own children were in elementary and middle school, I could usually tell if they had spent their after-school hours plugged in with video games, favorite shows, or movies. As they got older, it became music on their iPods. During high school, they all liked to unwind with seemingly innocent “free time” spent scrolling through the barrage of social media. When they were overly reactive to reasonable requests such as “Come and eat dinner” or routine questions like “How’s your homework going?” I almost always knew the culprit:

Popular psychology reports that 80% of over-stimulation comes from visual sources. I haven’t been able to confirm that with any scientific reference, but from my experience, I believe it to be pretty close.

When we see the signs of over-stimulation in young children, especially those who tend to be prone to overly sensitive or reactive responses, we have to make sure we’re modifying what’s going on so that we help children learn to recognize those signs and then do something about it.

No two- or three-year old is going to say, “Mom, I think I’ve watched too much ‘Dinosaur Train’ today.”

We have to do it for them!

7 Signs of Autism in Toddlers and Preschoolers

Song of the Day for Valentine’s Day!