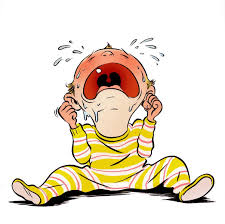 Lately I’ve been writing a lot about Fight, Flight, or Freeze and strategies to help a toddler who is overstimulated. Most of this discussion has been centered around how to address a child’s over-stimulation when we’re working on improving language skills, such as during a therapy session.

But here’s an important point I haven’t addressed…

Kids get angry and overstimulated for all kinds of reasons all day long, not just during therapy! Many times, it centers around the child not getting to do exactly what he wants.

You impose a limit. He loses it.

Are you familiar with this dilemma?

When a child with a language (or any other kind of developmental) delay is doing something wrong, as the adult, you want to provide correction or discipline, but you know that in doing so, you may make everything worse. And, when things get worse with a child like this, they may not get better for a long time.

So, in your mind, you feel stuck between a rock and hard place that sounds something like this:

If I don’t let him do this, he’s going to fall apart and be miserable (thus making me miserable) until I find something that works to calm him down, which can sometimes take an eternity.

If I let him continue to do this thing that I know he shouldn’t, I may never be able to stop him and he’s going to end up being a very difficult person for anyone to live with and like.

What if I cater to him so much that he never learns to follow any rules?

That’s a very real fear for parents of a child with a developmental difference.

I’ve worked with many parents (and therapists!) who are trying to reach middle ground for these situations. We want to establish behavioral expectations so that a toddler with language delays doesn’t turn into a mini-tyrant who gets to dictate to his parents and teachers and everyone else what’s okay and what’s not. At the same time, we also want a pleasant child who isn’t heartbroken or enraged when someone sets a boundary.

Is there a happy medium? Are there ways we can impose guidelines for a toddler who is easily set-off during regular, everyday activities at home?

There are things you can do BEFORE a child becomes overstimulated, no matter what the reason, to prevent tantrums or meltdowns. With careful observation and quick responses, we can intervene and intercept those situations that occur when a little one acts (and feels!) so, so very…Out. Of. Control. I want to make sure you’re equipped with practical disciplinary strategies to try, even when a child’s undesirable responses are the result of her not getting her way.

These techniques will not only benefit the child, but you too! Once you learn to sense the signs of a child’s impending over-stimulation, you will feel more in control because you’re taking action instead of standing idly by watching a meltdown unfold. You’ll also feel better about this disciplinary approach because you won’t feel like you’re contributing to a child’s distress and emotional dysregulation…aka making everything worse!

Don’t misunderstand me. I’m not promising that we can completely eliminate every tantrum and sensory meltdown. That’s unrealistic. Living with any toddler or preschooler can be described as “stormy” at times, but remember that late talking toddlers and preschoolers can be even more susceptible to feeling overly frustrated, misunderstood, and downright mad! Their ability to learn to self-regulate when they’re disappointed has also been disrupted and is delayed, just like their language development. Realizing that some young children with language delays can’t calm down on their own is an essential lesson for parents and for therapists.

Instead of waiting until a child has reached his boiling-over point, it is possible to do some things differently to head off those strong reactions. To me it makes sense to step in and try to prevent situations which lead to meltdowns, tantrums, giant “fits,” or any of those negative reactions we recognize as emotional dysregulation.

First let’s define each of these tactics.

Distraction means that you will divert a child’s attention away from something he isn’t supposed to do. For example, he’s reaching for the remote control for the 14th time in under a minute, and you say, “Hey buddy! I think I hear the garbage truck!” to which your child stops in his tracks, listens for a second, and then takes off to the front window to take a look for himself. He completely forgets about the remote control because now he’s engrossed with seeing the garbage truck. That’s distraction. You’ve drawn his attention to something else totally unrelated to his original offense.

Redirection means that you offer a new, but similar, alternative to something he’s doing that he shouldn’t. Let’s revisit the remote control issue. He wants to launch it across the room. AGAIN. So, this time as he’s reaching for the remote, you quickly grab the closest toy possible and cheerfully say, “Ooooh! Look! I have your ball!”  As you toss him the ball, you add, “You can’t throw the remote, but you can throw your ball.” That’s redirection. You are guiding the child to make a better choice.

Do you see how these simple actions on your part can help a child avoid over-stimulation that results from not getting his way? In case it’s not so obvious for you, let’s go back to the remote control scenario. This time let’s say that you didn’t distract or redirect when he repeatedly tried to throw the remote control, but instead, you yanked the remote control out of his hot little hand saying, “I’ve told you and told you. Stop touching the remote!!”

What reactions might a child have? He may cry. She could become angry.

To which some parents might say, “So what? That’s part of growing up. She has to learn what she can and can’t do.”

While that is undeniable, as many weary parents of kids with developmental delays will tell you, sometimes… it’s just not worth the fight. Particularly if a minor event, like having the remote control taken away, results in a child who completely falls apart. Not as in a pout or whimper that lasts for 10 seconds before he moves on to something else, but a toddler who in a millisecond goes from happily reaching for the remote to hurling himself backward on the floor as he lets out a blood-curdling “you’ve-destroyed-my-world” scream that goes on and on and on… a child who won’t can’t calm down no matter what you try.

Parents of a toddler who is successfully learning to self-regulate and self-soothe may not get how advantageous avoiding tantrums and meltdowns can be, but parents of a child who has tremendous difficulty settling down will understand. These are the parents who will see immediate benefit from switching most of their disciplinary efforts to a proactive, rather than a reactive, stance.

By proactive, I mean that you are use distraction and redirection BEFORE a child seems to need any intervention at all. You step in as soon as you recognize that something is likely to trigger a child’s intense reaction. This requires careful observation of a little person, which admittedly at times, can feel like a whole lot of work on your part. When a parent I’m working with seems to balk at this initial effort, I offer some version of this counterargument:

“Would you rather stop trouble before it occurs or suffer the aftermath, knowing you may have been able to avoid extreme disruption in the first place?”

I know my answer!

I’d rather avoid it altogether!

Especially when these meltdowns occur during a therapy session. My thinking is this… we have such limited time together anyway… why do I want to spend most of the hour trying to treat an overstimulated, emotionally dysregulated child? It’s just not worth it to me. I don’t believe it’s worth it to the child and his parents either.

That’s why I use distraction and redirection A LOT during therapy sessions with toddlers and I encourage parents of my little friends to do the same at home, especially when there’s no immediate threat to the child or another person. (In that case, you must act swiftly and remove the danger regardless of the impending outburst!)

Thankfully, most undesirable behaviors we see in toddlers and preschoolers with language delays can be managed with redirection and distraction, whether they’re at home, at daycare, in preschool, or during therapy sessions.

By using either of these techniques, we can accomplish what we set out to do:

Minimize frequent episodes of over-stimulation so that we can make the most of our time interacting with, playing with, and teaching a young child.

Many times, we can avoid these incidents so that we can continue to do what’s important. With distraction and redirection, we provide the external support that a toddler needs so that he can stay with us, and hopefully, learn from us, without the chaos of regular tantrums.

To me, that’s the beauty of redirection and distraction, especially with a young child who is not developmentally-ready for disciplinary techniques that require him to understand, remember, and follow “rules.” Believe me, there will be plenty of time for that later as he or she grows and matures. Until then, redirection and distraction are powerful tools to help manage a toddler’s potential misbehavior.

For more ideas for handling disciplinary matters with toddlers with language delays, check out my 2 DVD set Teach Me To Listen and Obey.