10 Great Ideas for Clear Plastic Tubes for Toddlers… Therapy Tip of the Week 5.28.18 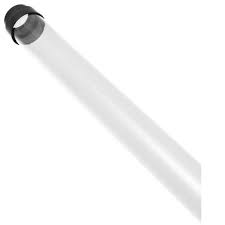 In this video, I’m going to show you how to teach toddlers 10 different language skills using a $5 lighting cover I picked up at Lowe’s.

You can make this activity as complicated or as easy as you’d like, but one thing is for sure, you’ll be able to use it over and over again – whether you’re working with your own child or a whole caseload of kids.

I call this activity TUBES.

First, take the ends out of the tube.

The next thing you’ll need is a group of little items to slide through the tube.

CAUTION: You’ll always want to provide close adult supervision anytime you’re using small objects with a baby or toddler. If a child is still mouthing small items, this is NOT going to be a good activity because you’re spending the bulk of your time monitoring behavior.

The purpose of the activity is to put an object in and let slide all the way through the tube.

Toddlers LOVE this activity because it’s novel– something that may captivate a child’s natural curiosity!! If you’ve spent any time studying child development or observing young children, you know that they like almost any activity with an in and out component. This one is even more fun because they can WATCH the item move through the tube.

Here are 10 (yes 10!) different goals you can target during this one activity:

Goal #1: Use this activity to build attention and participation.

Sliding objects through the tube is a quick attention getter for kids who don’t seem to like toys. When this is your primary goal for a child, try not to over-talk because that may drive a kid who avoid play away from you. Instead of talking, use sound effects like Swoosh. By doing this, you unobtrusively insert yourself in to the activity without overtaking it

Help a toddler learn and practice concepts like cause & effect and simple problem solving.

For cause and effect with the tube, he or she learns… I put an object in and it slides down and comes out.

To teach problem solving (and size), offer some items that don’t fit in the tube. A child will naturally try to make it fit and don’t stop them. They are learning. Describe what’s happening by saying… “Oh no! It’s too big!”

Sometimes “real” words are too difficult for late talkers and we need to begin by teaching them to say easier kinds of words that are more like sound effects. My favorites for this activity are whee, whoa, whoosh, swish, or other silly noises. Excitedly say these sounds several times as you’re playing, and then encourage a child to imitate by putting your mouth just in front of the tube and modeling the sound several times, then offer the tube to him.

To teach verbal routines, be sure to use animated facial expressions and tone of voice to capture a child’s attention.

After you’ve played using this routine for a while, pause to see if a child will fill in the words himself.

Once a child can say these words during this activity, it’s important to look for new contexts or situations when a child can use the word. Therapists call this generalization, or moving a word a child has learned in one specific context to a new context.

This activity is a great way to teach early prepositions like in and out and up and down.

From a speech sound perspective, I like to use this play activity when I’m working on vowel differentiation with a toddler. You can emphasize the beginning vowels like “iiiiiin” vs. “ooouuuut.”

Goal #6: Help a toddler learn to ask for what he wants.

My favorite way to use this activity is to teach requesting, and not for the tube, but for the objects you’ll use.

To ensure that you provide enough opportunities to request, hold the items until a child asks for it and never give more than one item at a time.

Be sure to vary the items you’re using for kids who know how to say lots of words but are primarily using the for labeling. To do this, you can ask, “What’s this?” to elicit the name of the item and then have them learn to request by providing some choices and asking, “Tell me what you want.”

If a child is nonverbal, he can still learn to request. Teach new signs for the specific words or even general signs like “more” or “please” to get requesting going.

If you are not using signs with a child who is still pre-verbal, teach him to use a gesture to ask for what he wants. Work on pointing by modeling how to point. Say something like, “What should we get?” and then dramatically point to his options. “Duck? Or the cat? Show me.”

Goal #7: Use this activity for “mass practice” to perfect a new skill.

“Mass practice” means that you’ll target the same goal over and over and over which builds mastery. This works well when for late talkers when a child has said a word a few times but is inconsistent. This activity is fantastic for helping a child practice that new word until he can say it easily and often. The task is fast and fun and won’t be as frustrating as a speech drill.

For example, let’s say that “car” is a word that’s pretty new for a child. Get yourself 10 or so cars and have him ask for the car one by one to roll it down the tube. Look how many times he could practice that target word!

This is a great idea for targeting new speech sounds with little ones too when the activity needs to stay play-based. For example, if you’re working on helping a child learn to use a new pattern or correct an error, set up your toys so he can practice. Let’s say you’re working with a child who substitutes pharyngeal consonants like “k” and “g” for bilabial consonants like “p” and “b.” You would practice words like “ball” and “push” to stabilize that new pattern.

I love this idea for teaching turn taking with another child or a sibling – or even me –  when a child seems to resist including other people in play. Here you’re teaching… I take a turn – you take a turn.

Don’t give up complete control of the tube or you’ll really get left out! Let the turns be with who gets to put the object in the tube. This works with the activity because the turns are super fast and there’s not a lot of waiting when the child isn’t doing something fun. He can still see the ball roll, even when it’s not his turn.

I’ve used this game to expand play skills for a child who is super repetitive, stuck, or perseverative meaning he’s locked in to what he wants to do and nothing else. During tubes you can try to get him to do something new when he’s usually rigid or fixated.

For example, for a child who is fascinated with lining up his trains, this activity can be a way to help him try a different action with his trains. He’ll slide then in instead of lining them up.

Or let’s say a child is obsessed with letters and numbers and resists playing with other kinds of toys. You can first get him to “play” with his letters and numbers during this activity. It improves flexibility while still using his highly preferred object or interest.

Goal #10: Use the tube as a gateway to offer new play experiences.

The tube can easily be adapted beyond sliding objects in and out.

For example, you can use it in the bathtub for water play. Or put it in a sensory box with rice and beans. You can offer a new experience by placing the ends back on and watching it fill up or making a noisy shaker.

This activity has also become a favorite one for kids to do on their own after you introduce it. In this situation, it’s a great option for fostering independent play too.

What if you don’t have a plastic tube?

Use a tube from gift wrapping paper or paper towel roll. It’s not clear, but cardboard, and a child will still benefit and have fun!

There you have it! Now you know at least 10 different ways you can use this cool tube to target language with late talkers!

If you need a tube, here’s a link!